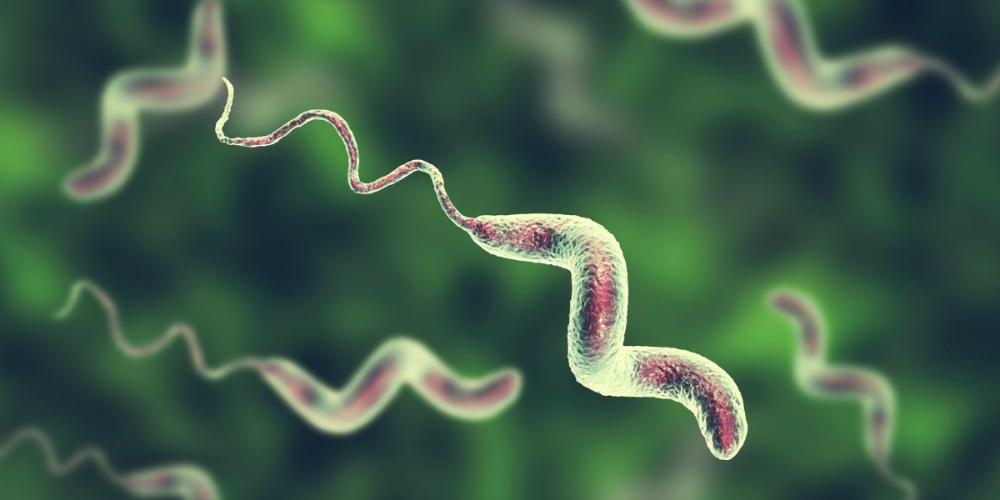 The genus Campylobacter contains motile, non-spore forming Gram-negative bacteria that typically appear comma- or s-shaped. It was first identified in 1906 by two British veterinarians John McFadyean and Stewart Stockman who reported “large numbers of peculiar organisms” in the uterine mucus of a pregnant ewe. Campylobacter contains 22 species among which Campylobacter jejuni and Campylobacter coli are the well-known species mainly responsible for gastroenteritis in humans. They are the most common cause of foodborne illnesses across the UK with approximately 90% caused by C. jejuni.

Where can we find it?

Campylobacter spp. is a commensal microorganism of the gastrointestinal tract of many avian species especially poultry, farm animals (cattle and pigs), and companion animals (dogs and cats). The bacteria thrive best at temperatures 37°C to 42°C; hence they are well adapted to birds which have an internal body temperature of 41°C to 42°C.

Campylobacter spp. causes Campylobacteriosis which is characterised by diarrhoea (frequently bloody), abdominal pain, fever, nausea and sometimes vomiting. The incubation period for the bacterium is 1-2 days from the time of consumption of contaminated food or water. Most people with Campylobacter infections do not require any antibiotics for treatment, they usually completely recover within a week and are rarely left with long-term health problems. Some may develop complications such as irritable bowel syndrome for a limited time, temporary paralysis, arthritis, and Guillain-Barré syndrome, in which a person’s immune system is triggered by an infection leading to muscle weakness and paralysis requiring intensive medical care.

The transmission occurs through the faecal oral route through ingestion of contaminated food and water. Many wild animals which are consumed by humans can carry Campylobacter spp. with no signs of illness. When the animals are slaughtered, the bacterium can be transferred from the intestines to the other parts of the body that are edible. The consumption of this meat when not cooked properly then leads to infections. People can also get infected when utensils used to prepare raw chicken aren’t washed properly before and after cooking. A single drop of juice from raw chicken can contain enough bacteria to infect someone. Soil and water containing faeces from wild animals can also transmit the bacterium on fruits and vegetables through contact.

Whilst it is impossible to eliminate the risk of Campylobacter, there are some simple steps you can take to avoid the infection, such as:

With changing climates and extreme weather conditions, such as Storm Ciara and the Australian wildfires, it is good to know [...]

Milk – popular and ubiquitous - but quick to spoil and become undrinkable because of the activity of the abundant [...]