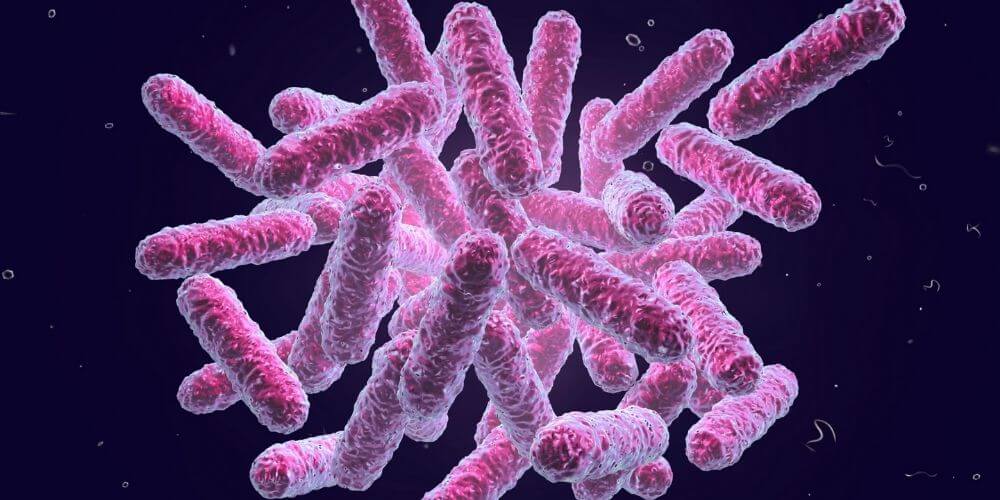 Salmonella often hits news headlines for causing severe food poisoning outbreaks. Unfortunately, the beginning of April 2022 saw yet another outbreak, this time across multiple countries, including the UK. To better understand what causes Salmonella, what makes it thrive and how to avoid it, in today’s ‘Microbial Top Facts’, our microbiologists discuss this particular bacterium.

The genus Salmonella was first discovered in 1885 by Daniel E. Salmon, an American veterinary pathologist, and his assistant Theobald Smith who had been searching for the cause of common hog cholera at the time. Salmonella is composed of Gram-negative, rod-shaped, and non-spore forming bacteria that belong to the Enterobacteriaceae family. It consists of two species, S. enterica and S. bongori, that can be generally found in digestive tracts of humans and animals, especially reptiles. S. enterica has six main recognised subspecies, however, almost all Salmonella organisms that cause diseases in humans and domestic animals belong to S. enterica subspecies enterica (I).

Most Salmonella strains can cause Salmonellosis, a symptomatic foodborne infection that invades the human and animal intestinal tract. It causes common symptoms in humans like diarrhoea, fever, abdominal cramps and vomiting and is often associated with the consumption of poultry and raw eggs. Some other types of Salmonella can cause typhoid and paratyphoid fever otherwise known as enteric fevers, which can be life-threatening and require prompt antibiotic therapy treatment.

Salmonella lives in the intestines of people and animals; the most common animal reservoirs are chickens, turkeys, pigs, cows and dozens of other domestic and wild animals like reptiles and amphibians.

Perhaps surprisingly, reptiles and amphibians – such as turtles, snakes, and lizards – can carry the bacterium on their bodies which can then easily be transferred to their cages or vivarium.

Humans can get Salmonella infections from a variety of sources including eating contaminated food, drinking contaminated water and touching infected animals, their faeces or their environment.

Salmonella diseases are zoonotic; this means that an infection can spread from animals to humans. For this reason, it is recommended that reptiles or amphibians are not kept in households with children under 5 years old, or anyone with a weakened immune system. Always wash your hands after touching reptiles or amphibians and their surroundings.

Salmonella strains that cause enteric fevers primarily involve person to person spread because these organisms lack a significant animal reservoir.

What makes it thrive

Salmonella is a ubiquitous and hardy bacterium that can survive several weeks in a dry environment and several months in water. It is frequently found in polluted water, with contamination from the excrement of carrier animals. Salmonella spp. are facultative anaerobes that can also survive under low oxygen levels, for example manure pits.

Salmonella spp. are difficult to eradicate from the environment. Since the major reservoir for human infections is poultry and livestock, it is important to take precautionary measures. This includes a strong focus on hygienic practices, especially for all food-handling personnel in food processing plants and restaurants. At home, it is paramount to refrigerate or freeze perishables and wash hands thoroughly before and after handling food. To reduce the risk of cross-contamination, it is also recommended to regularly disinfect all common touch points such as door handles, bathrooms, kitchen surfaces and toilets.

Salmonella outbreaks are a common occurrence, although not all of them draw as much media attention as the latest multi-country outbreak. As of 5th April 2022, seven EU/EEA nations, including the United Kingdom, have documented 134 cases caused by monophasic Salmonella Typhimurium, the majority of which involved children under the age of ten.

The culprit behind the outbreak has been identified as the popular Kinder chocolate eggs. Officials have ordered the closure of the Belgium-located Kinder chocolate factory that is suspected of being responsible for the surge of cases. The decision, as well as the health concerns, come as a setback for its owner, Ferrero, at a time when its Kinder chocolates are in high demand due to the Easter holidays.