The Origin of Mueller-Hinton Agar 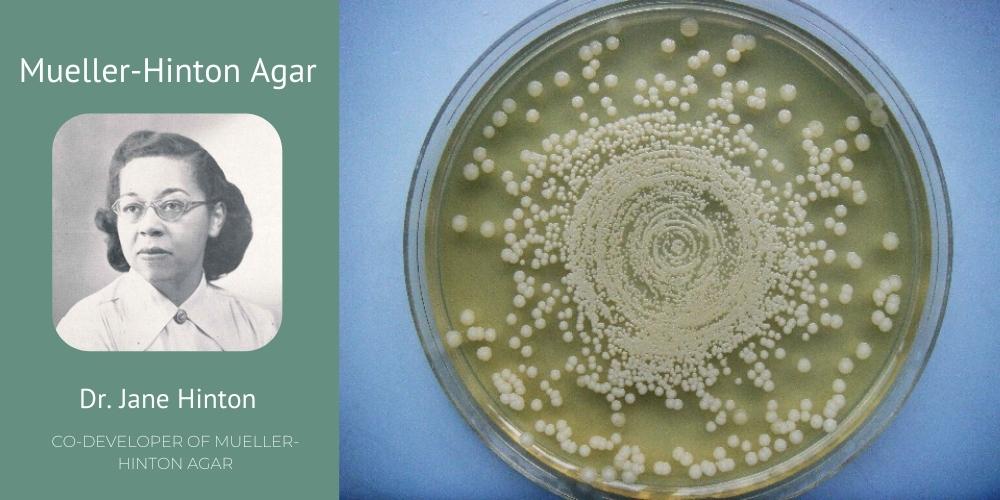 Who was Jane Hinton?

Jane Hinton, who was born on 1st May 1919, in Canton, Massachusetts, is the woman to whom we owe the discovery of the Mueller-Hinton agar used in the Kirby-Bauer test method.

After completing her undergraduate degree, she worked at her father’s laboratories in Harvard. It was there she assisted John Howard Mueller, with whom she developed the Mueller-Hinton agar medium at the age of just 20 years old.

What is Mueller-Hinton agar?

The Mueller-Hinton agar is a non-selective, non-differential medium, capable of growing a wide range of non-fastidious organisms. It is considered a ‘loose’ agar as it allows the antibiotics being tested to diffuse throughout the medium, resulting in more accurate results. They also discovered that the addition of starch acts to absorb any toxic factors found during growth. The inclusion of starch in the mixture means that toxins released by the pathogen get absorbed and therefore don’t affect the antibiotic susceptibility test. This discovery, alongside other ingredients, makes this medium ideal for standardised antimicrobial disc susceptibility testing.

How is it used today?

In recent years there has been a lot of interest in antimicrobials, for example research into the antimicrobial activity of silver nanoparticles with and without the combination of antibiotics which has shown to reduce bacterial growth. This is something the Mueller-Hinton agar is highly useful for. Mueller-Hinton agar is commonly used for antibiotic susceptibility testing for the Kirby-Bauer disc diffusion method or standard antibiogram, it can therefore be used for clinical diagnosis.