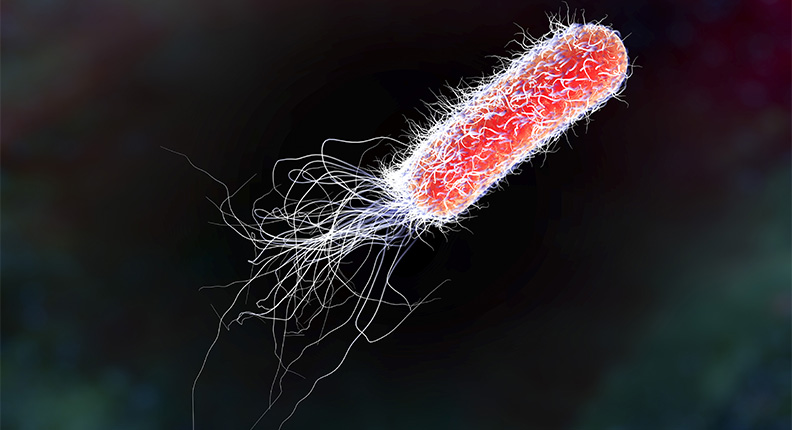 At BioLabTests, we offer a wide range of testing services to clients such as environmental testing, product testing and microbiological research. In our blog series about microbial top facts, we feature bacteria that we frequently use at our laboratory for testing. Today we are taking a closer look at Escherichia coli (E. coli), which was discovered in 1884 by the microbiologist Theodore Eschrich – hence its name. Here are some facts about E. coli you may not know.

Where can we find E. coli

E. coli is a Gram-negative facultative anaerobe that resides in the human and animal gut as a normal part of the microbial population, therefore referred to as a ‘coliform.’ It can also be found in raw, uncooked food such as ground beef and bean sprouts. Most E. coli are harmless and are part of a healthy intestinal tract, but some can cause severe and even fatal illness.

What makes it thrive

E. coli thrive in warm, wet, dark places that are rich in nutrients, such as human and animal intestinal tracts. Once excreted, the bacteria cannot survive the harsh conditions of the outside world; however, some manage to find their way into lakes and streams, or another host. The spread of coliforms, including E. coli, from the gut to everyday objects like skin, computer keyboards, money and door handles, is known as faecal contamination andis a common process.

What can it cause

In order to begin an infection, E. coli must release toxins which allow the bacterium to bind to the lining of the gut. It can then enter the body and cause symptoms of disease such as diarrhoea associated with food poisoning.

E. coli exists as different types – scientists separate them as strains according to their antigens and virulence factors. The strain called 0157:H7 is regarded as the most potent type of E. coli because the infection it causes can easily be fatal.

Scientists know that a minimum number of microbes is needed to begin an infection, called the infectious dose. Often this number is very high – many thousands of microbial cells must gain entry to the body before symptoms of infection appear. Unfortunately, E. coli 0157’s infectious dose is incredibly low – just 10 E. coli 0157 cells can result in bloody diarrhoea, severe to fatal haemorrhagic colitis and the severe kidney disorder, haemolytic uremic syndrome in which the kidneys cease function.

Why test for it

E. coli is relatively easy to handle and culture in the laboratory and is capable of rapid growth at a wide range of temperatures and environmental conditions. In hygiene sensitive industries, testing for E. coli is considered a good indicator of poor or failed hygiene systems. The presence of E. coli generally suggests faecal contamination.